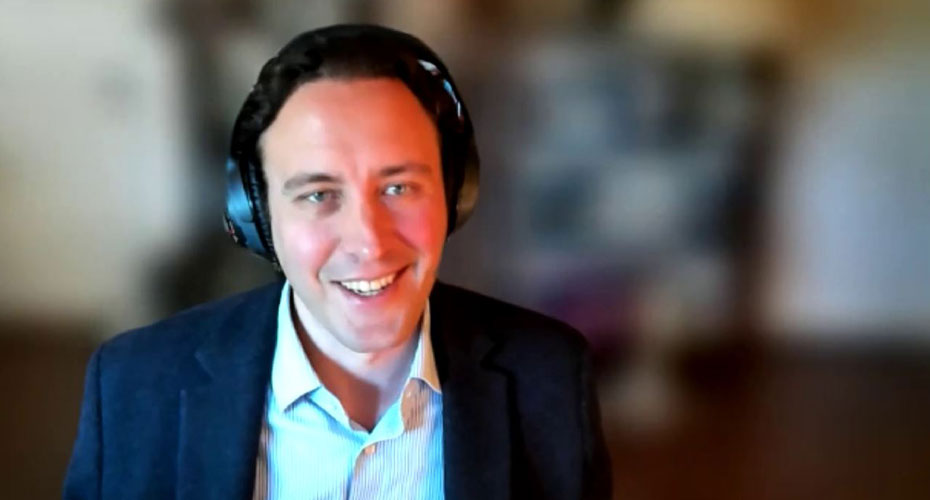 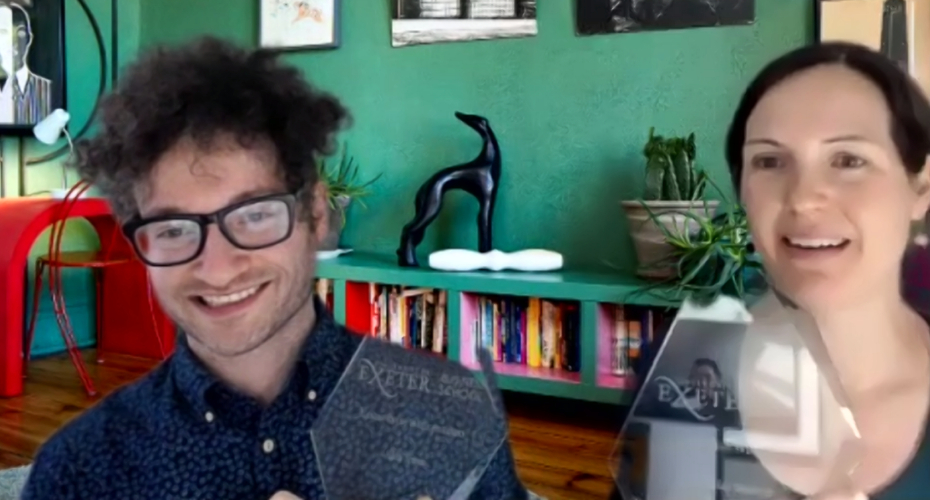 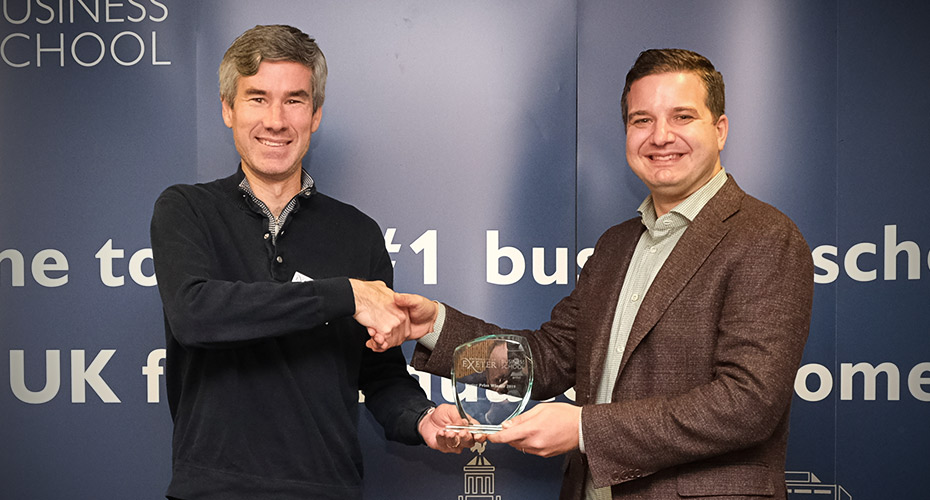 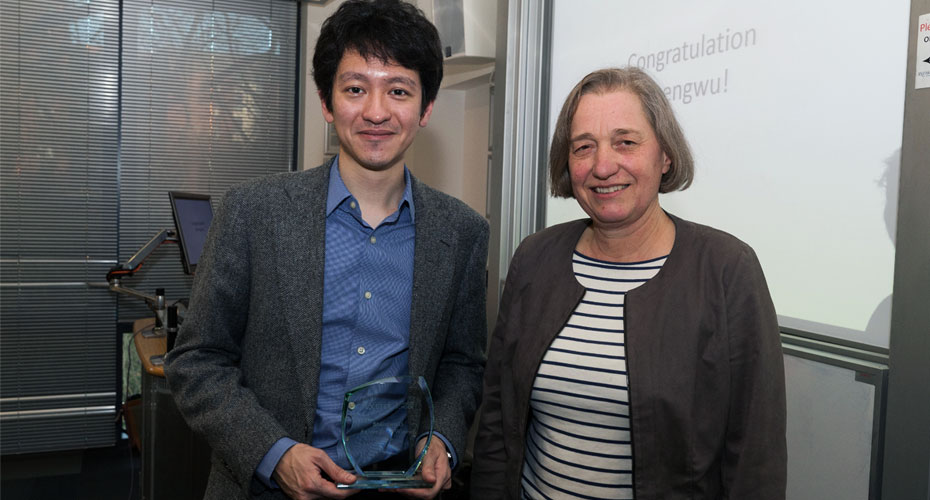 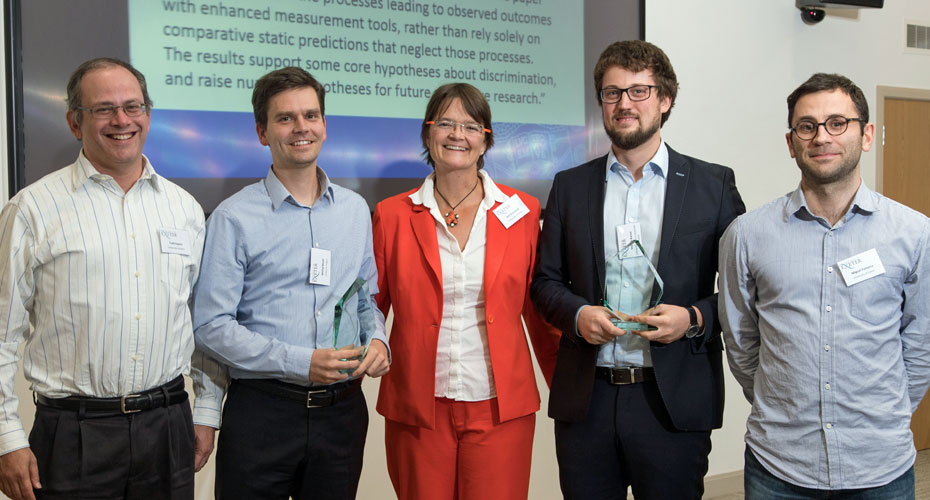 Michal Bauer and Vojtěch Bartoš, 2017 winners of the Exeter Prize 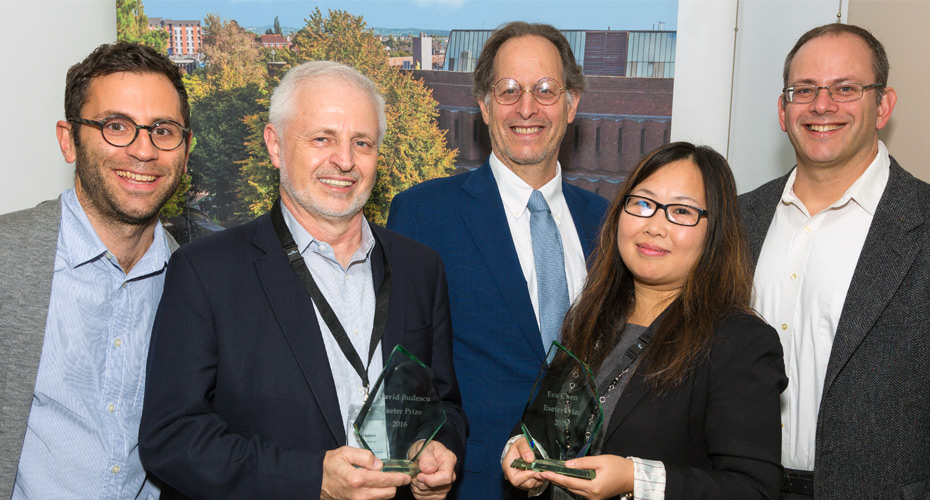 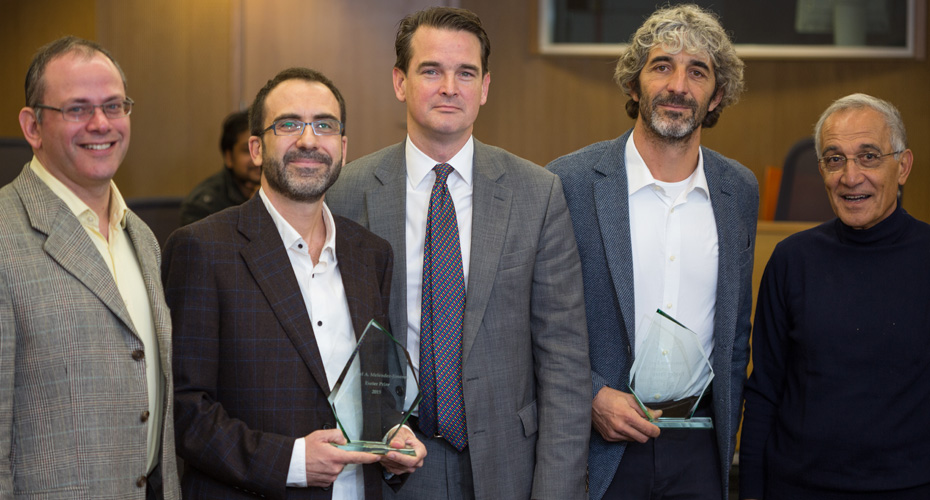 Miguel Meléndez-Jiménez and Francesco Feri, 2015 winners of the Exeter Prize 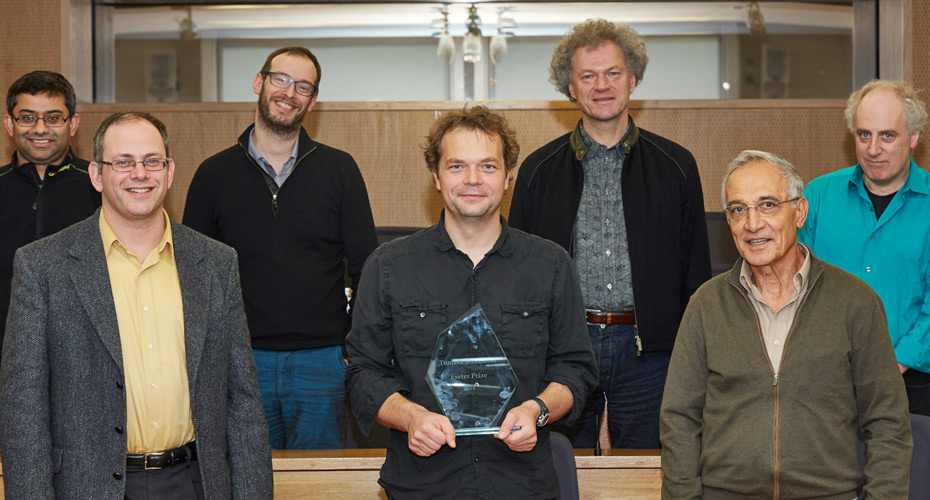 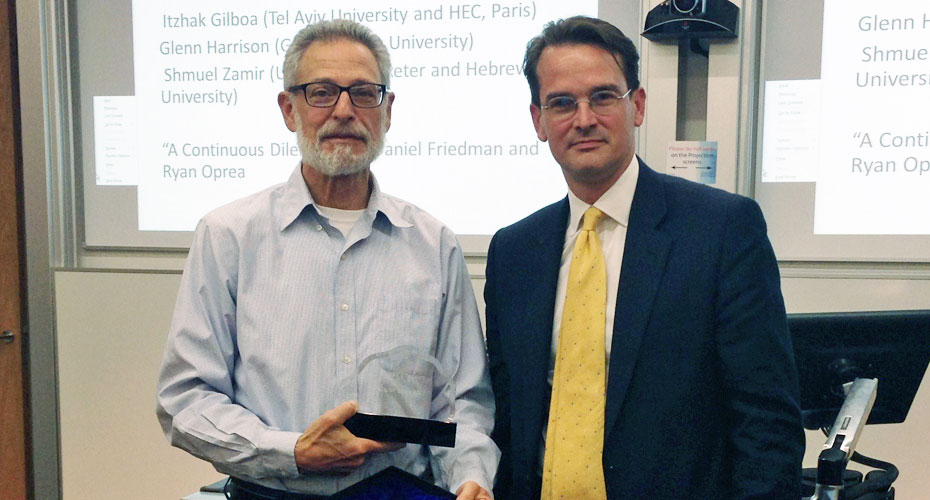 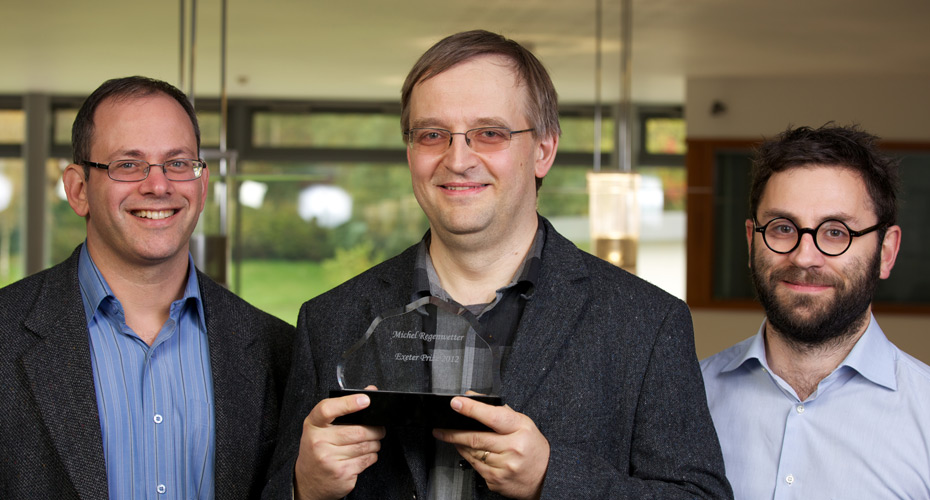 Nominations are currently closed for the 2022 Exeter Prize.

The shortlist and winner will be announced in the summer.

See a recording of the 2021 winner Ryan Oprea presenting his paper “What makes a rule complex?”

We are happy to announce the winner of the 2021 Exeter Prize for the best paper published in the previous calendar year in a peer-reviewed journal in the fields of Experimental Economics, Behavioural Economics and Decision Theory.

The winner is Ryan Oprea (University of California at Santa Barbara) for his paper “What Makes a Rule Complex?”, published in The American Economic Review.

This paper offers a crisp experimental measurement of complexity. It offers a rich description of how complexity affects actual humans, which has tremendous potential for informing policy making as well as theoretical research across disciplines (from psychology, computer science, and cognitive science to economics). In the experiment the subjects are asked to implement various decision rules. Five dimensions of complexity are studied: the number of states and transitions, existence of absorbing states and redundant states, and a measure of working memory. The paper looks at three different measures of behaviour: the error rate, the implementation time, and the subjects' own willingness to pay to get the decision rule implemented by a computer. The experiment also measures how fast people learn various decision rules and how transferable this knowledge is. This paper offers a new impetus for research, getting us outside of our comfortable box of constrained optimization. This is a risky and challenging attempt, with a high upside potential.

In addition to the winner, this year’s shortlist was:

We are happy to announce the winner of the 2020 Exeter Prize for the best paper published in the previous calendar year in a peer-reviewed journal in the fields of Experimental Economics, Behavioral Economics and Decision Theory.

The winners are J. Aislinn Bohren (University of Pennsylvania), Alex Imas (Carnegie Mellon University), and Michael Rosenberg (CarGurus) for their paper “The Dynamics of Discrimination: Theory and Evidence,” published in The American Economic Review. The paper highlights a need for studies of dynamics of performance and judgment within the female discrimination literature. It demonstrates the importance of the presence of objective evidence regarding performance at early stages of the interaction to offset biases and prejudices – an observation with important policy implication in many organizations.

In addition to the winner, this year’s shortlist was:

The winners of the 2019 Exeter Prize are Samuel M. Hartzmark (University of Chicago) and Kelly Shue (Yale University) for their paper “A Tough Act to Follow: Contrast Effects in Financial Markets”, published in The Journal of Finance.

The paper provides evidence that contrast effects exist in an important real-world setting: Financial markets. The contrast effect has previously been shown to be a psychological bias that inversely distorts humans’ perception of information. That is, individuals perceive signals as higher or lower than their true values, depending on what the recently observed signal was – even if that “benchmark” signal is actually irrelevant for the present evaluation. While this bias has been demonstrated primarily in controlled laboratory environments, evidence from the field is more limited but available for individual decision making contexts of, for example, speed dating and consumer housing and commuting choices. Hartzmark and Shue’s paper goes substantially further by providing evidence for the existence of contrast effects in the presence of typically disciplining arbitrage opportunities and expertise; that is, in sophisticated markets with professionals who make repeated investment decisions. Hartzmark and Shue show that contrast effects to preceding earnings’ announcements of oftentimes even irrelevant firms distort equilibrium prices and capital allocation. Furthermore, they find that this costly mispricing effect reverses within approximately 50 trading days. Finally, the authors argue convincingly that this contrast effect likely biases perceptions of news rather than expectations. Together, Hartzmark and Shue’s paper demonstrates to us that markets may not be as efficient as economists typically assume:  Prices react not only to the absolute content of information but are also prone to perceptional errors stemming from relative comparisons.

Samuel will be visiting the University of Exeter to receive the award and give a public lecture.

This year was again exceptionally competitive with a large number of excellent nominations. In addition to the winner, this year’s shortlist was:

The winner of the 2018 Exeter Prize is Shengwu Li (Harvard University) for his paper “Obviously Strategy-Proof Mechanisms”, published in the American Economic Review.

The paper proposes and analyzes a desirable property for mechanisms implementing social outcomes. A mechanism is a game whose rules are designed by a social planner for the purpose of implementing a certain desirable social outcome (e.g., efficiency or fairness). Such mechanisms are always designed under the assumption that the parties involved will play an equilibrium outcome. Strategy Proof mechanisms received special attention in the literature, because they implement an outcome that is not only an equilibrium, but also one with dominant strategies, i.e., no player can do anything better than playing the strategy that leads to the socially desirable outcome, no matter what other people are doing. Yet as experimental and empirical results have shown, in real life, strategy proof mechanisms don’t always guarantee that players will do what they are expected to do. This is mainly because the reasoning behind the “right thing to do” is often complicated even in cases that admit a dominant-strategy equilibrium (one prominent mechanism of this sort is the second-price auction). Li’s paper proposes a concept of “obvious mechanisms.” This mechanism not only admits a dominant-strategy equilibrium, but also guarantees that it is cognitively simple to confirm that playing anything else is irrational. Li’s approach allows us to make mechanism design theory more applicable, and closer to reality. It warns us against choosing social mechanisms that we as game theorists hold to be secure, but when applied in the real-world will prove to be too complicated for people to do the right thing.

The winning paper was selected by the panel of Rosemarie Nagel (Pompeu Fabra University), Michel Regenwetter (University of Illinois) and Eyal Winter (Hebrew University of Jerusalem and Lancaster University)

The paper proposes a theory of discrimination in which levels of attention to information about applicants to a market depend both on whether the applicant is a member of an “attractive” group and on the structural features of the market.  Methodologically, it seeks to test theory about the processes leading to observed outcomes with enhanced measurement tools, rather than rely solely on comparative static predictions that neglect those processes. Field experiments complement prior laboratory research into the processes of selective attention, and span rental housing and labor markets in the Czech Republic and Germany. The results support some core hypotheses about discrimination, and raise nuanced hypotheses for future normative research.

The winners of the Exeter Prize 2016 for Research in Experimental Economics, Decision Theory and Behavioral Economics are David V. Budescu (Fordham University) and Eva Chen (University of Pennsylvania) for their paper “Identifying Expertise to Extract the Wisdom of the Crowds”, Management Science, 61(2), 2015, 267-280.

How can one more accurately predict a future event, by asking many people or by seeking the advice of a few experts? This paper examines a middle ground between reliance on quantity (a crowd) and quality (experts). Since Condorcet’s work on the mathematical theory of voting in the 18th century, scholars have considered the idea that, collectively, we can cancel out individual biases and make better decisions under certain conditions and ways of aggregating individual opinions.

What is now known as the “wisdom of the crowds” refers to the ability of a large group to outperform individuals in tasks such as predicting a future event.  At the same time, the natural appeal of expert judges lies in their specialized skill sets and their superior knowledge of a given domain. This paper develops a method for incorporating the wisdom of the crowds with expertise by identifying experts in a crowd and measuring their contribution to the crowd’s overall performance.

The proposed method, based on the simple idea of attributing higher weight to well performing experts, is tested in a large scale empirical study and exhibits a good performance. This paper will likely stimulate further research to improve the method. For example, possible refinements may take into account the incentives and strategic considerations of experts to report their beliefs truthfully.

The winning paper was selected by the panel of Glenn Harrison (Georgia State University), Michel Regenwetter (University of Illinois), and Shmuel Zamir (Hebrew University and the University of Exeter).

The winners of the Exeter Prize 2015 for Research in Experimental Economics, Decision Theory and Behavioral Economics are Gary Charness (UCSB) , Francesco Feri (Royal Holloway), Miguel Melendez (Malaga), and Matthias Sutter (Cologne and Innsbruck) for their paper "Experimental games on networks: underpinnings of behavior and equilibrium selection" published in Econometrica in 2014.

This paper provides a balanced portfolio of theory, experimental design, and the pursuit of alternative explanations for behavioral puzzles. Considering designs that span a wide range of interesting networks, they find that theory predicts behavior tightly when there is a unique equilibrium. And when there are multiple equilibria, traditional characteristics describing the network play an important role in describing behavior. Their study establishes a careful, informed behavioral base from which further research into network behavior will proceed.

The winner of the Exeter Prize 2014 for Research in Experimental Economics, Decision Theory and Behavioral Economics is Tomasz Strzalecki (Harvard University) for his paper "Temporal Resolution of Uncertainty and Recursive Models of Ambiguity Aversion" published in Econometrica in 2013.

The winners of the Exeter Prize 2013 for Research in Experimental Economics, Decision Theory and Behavioral Economics are Daniel Friedman, (UC Santa Cruz) and Ryan Oprea (UC Santa Barbara) for their paper "A Continuous Dilemma" by published in American Economic Review in 2012.

The winner of the inaugural Exeter Prize 2012 for Research in Experimental Economics, Decision Theory and Behavioral Economics is "Transitivity of Preferences" by Michel Regenwetter, Jason Dana and Clintin P. Davis-Stober, published in Psychological Review in 2011.