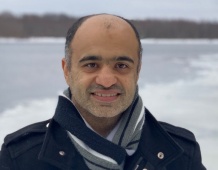 An Exeter researcher is among the winners of the British Science Association’s Award Lecture series for his research into online misinformation.

Dr Mohsen Mosleh, a Lecturer in Business Analytics at the University of Exeter Business School, has been named Award Lecture winner for Digital Innovation.

He is part of a select cohort of seven early career researchers who have been recognised for their cutting-edge work and commitment to public engagements.

Dr Mosleh has been invited to present his work at the British Science Festival, which will take place from 13-17 September at De Montfort University in Leicester.

His research, which has been published in leading journals such as Nature, Nature Communications, and the Proceedings of the National Academy of Sciences of the United States of America (PNAS) looks at why people share misinformation and how we can combat the spread of low-quality content online.

Dr Mosleh, who is also a Fellow at the Alan Turing Institute and a Research Affiliate at MIT Sloan School of Management, spoke of his delight at receiving the award.

He said: “I am so delighted to have received this award and to have been invited to speak in such a public forum about what my research hopes to achieve in tackling a problem that has such public and profound consequences for societies.

“Online misinformation compromises our ability to make informed opinions on a range of subjects, from the economy to health, the environment and political processes such as elections.

“As more and more of our lives are conducted online it is vital for our democracies that we improve our understanding of how misinformation spreads so that we can develop strategies and systems that will help us recognise and reject it.”

In one study that received widespread media coverage, Dr Mosleh found that when Twitter users make polite corrections to factually inaccurate tweets it makes the offender more likely to double down on misinformation and toxic language.

And in another study he found that most people who share false news stories online do so unintentionally due to not paying attention, and that reminders about the importance of accuracy can make people more discerning in what they share.

He is currently working on a research project investigating and testing the best correction strategies to debunk false claims online, a project for which he was awarded $60,000 through the inaugural Google Research Scholars programme.