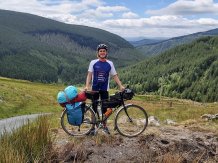 An inspirational University of Exeter student has been nominated for a Pride of Britain Award after going on an epic “Tour de Full English” bike ride around the country in memory of his parents.

Jeremy Daubeny raised £37,500 cycling the country in search of the best English breakfast to support two charities that helped him when he lost his mum and dad.

Jeremy, now a student at the University of Exeter, and his sister Jessica, 22, a music and theology student, have supported each other, motivated by the memory of their “incredible” parents.

He has won the ITV Meridian Fundraiser of the Year, for the South East, as part of the Daily Mirror Pride of Britain Awards, and will attend the national award ceremony in London later this year.

Jeremy, 19, from Tunbridge Wells, was surprised by an ITV camera crew while having coffee on campus with his flatmates. He was nominated by his best friend Woody Dufton and his mum Jo, who have supported him and Jessica in recent years.

Jeremy said: “I feel really overwhelmed and ecstatic to be nominated, particularly during this week, when it’s been three years since my dad passed away. I’m really looking forward to going to the ceremony.

Jeremy, who is in his first year of studying for an economics and politics degree, is a young ambassador for the Brain Tumour Charity and MND Association, and is hoping to organise and take part in more fundraising events in the future.

He said: “The bike tour all began on my gap year, when I couldn’t travel because of covid. I got bored waiting, and got thinking on my bike rides around where I live and the idea was born.

“I’ve been very lucky to meet some brilliant people at university so far – particularly my flatmates, and it’s been nice to be able to talk to them about my parents and life at home. Of course it is not easy telling people what has happened, but it’s been so nice to have new friends and they will help me celebrate this win.”

Jeremy has joined the Fundraising Society, Cycling Club and Expedition Society since arriving at the University of Exeter, and has been exploring Devon on his bike.