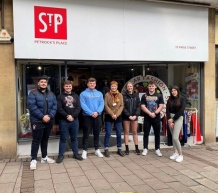 Business School students are taking action to combat drinks spiking through a product they hope will improve students’ safety on nights out.

Chris King and Lennan Day, both third-year Business School students, are leading a team selling ‘Spikies’, reusable stoppers that can be wedged into the top of a bottle leaving room for a straw – but nothing else.

Lennan explains why the Spikey top stoppers stand out from other products on the market.

“There’s nothing like this out there,” he says. “The ones you see out there in bars are essentially a plastic cover that goes over glasses, they do not work for bottles.

“This is specifically designed to fit into a bottle, despite a lot of popular drinks for students being things such as VKs or WKDs that are in bottles.”

With all profits going to the homelessness charity St Petrock’s, the students’ goal is to get the stoppers stocked inside venues, clubs and pubs across Exeter, as well as in student accommodation and elsewhere in the University.

University clubs and societies have already expressed an interest in the top stoppers, which are being sold for £1 for two, or £3 together with the students’ self-designed multi-functional bottle opener.

Chris said: “The idea with selling the stopper and the opener together is so that you can open the bottle yourself before putting the stopper in, and that way you’ll be the only one who knows what’s in your drink.”

The Business Ignition module is part of the With Proficiency In Entrepreneurship programme (WPI-E), which is open to the majority of Exeter students as a degree enhancement pathway.

The module requires students to partner with local charities, and Lennan and Chris chose St Petrock’s, the Exeter charity for people who are homeless or vulnerably housed.

A spokesperson for St Petrock’s said: “We are very grateful to students from Exeter University for supporting St Petrock’s through their top stopper initiative. This will hopefully raise awareness amongst the student population of the issues of local homelessness and spiking incidents and the proceeds generated will help us fund our ongoing survival services to rough sleepers in Exeter.”

Chris and Lennan ultimately want the stoppers to be available in clubs, bars and venues across Exeter, and recently discussed their plan with the Lord Mayor of Exeter, Cllr Trish Oliver.

“They inspired me with their passion and initiative for this important project and I was delighted to signpost them to their ward councillors and others to move the idea forward. Congratulations to them for their determination, perseverance and hard work,” said Cllr Oliver.

Dr Greg Molecke is the convenor of the Business Ignition - Idea to Implementation module and a Lecturer in Social Entrepreneurship and Philanthropy at the University of Exeter Business School. He said he was delighted to see how the students were learning more about the human and community side of business.

“Exeter’s entrepreneurship courses really try to make the connection between business and impact by emphasizing how the best and most successful products are those that help people with problems in their lives,” said Dr Molecke.

“We often say, ‘People don’t buy products, they buy solutions to problems.’ It is always a pleasure to see how students take this mantra and apply it in the WPI-E program to the real world problems of the people of Exeter.

“This team’s work is one of many going on around Exeter at the moment. We have teams dealing with issues from reducing food waste to increasing recycling, from increasing people’s ability to find connections for sports and hobbies, to reducing anxiety when they are alone, and from supporting individual businesses to thrive to creating new models for charity shops to sell their goods more effectively.

“In the process, the students learn both business skills and the deep connection that can (and should) exist between doing business and helping people.”