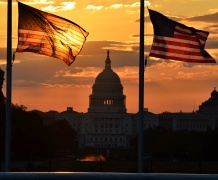 Twitter users are three times more likely to follow back the accounts of strangers if they share the same political views, according to a new study that sheds light on the phenomenon of ‘echo chambers’ on social media.

The peer-reviewed study saw researchers, including from the University of Exeter Business School, conduct a field experiment on Twitter to test whether shared political affiliation alone was enough to make US users of the platform follow someone back on the platform.

The researchers created a sample of 842 Twitter users by identifying those who had retweeted MSNBC or Fox News posts and who were therefore likely to hold some degree of partisan bias towards either the Republican or Democratic Party.

Eight human-looking bot accounts that self-identified as either Democrat or Republican – to varying strength of partisanship – then followed the sample Twitter users.

Using a linear probability model, the researchers found that Twitter users were nearly three times more likely to follow back someone whose political affiliation matched their own, regardless of the bot’s strength of political identification.

This was true for both Democrats and Republicans, a finding that runs contrary to previous research arguing that conservatives on Twitter are more likely than liberals to create social ties with people they perceive to be similar to themselves.

The authors say their study is the first to show, in a real-world setting on social media, that political affiliation is a decisive factor behind the creation of social ties.

According to lead author Dr Mohsen Mosleh, Lecturer in Business Analytics at the University of Exeter Business School, demonstrating how shared political affiliation causes the formation of social ties could have important implications for political psychology, social media and the state of the politically polarised American public.

Dr Mosleh said: “Americans are much more likely to be socially connected to those with similar political beliefs, both in daily life and on social media. But this does not necessarily mean that shared partisanship per se drives social tie formation, because partisanship is confounded with many other factors.

“Our findings demonstrate that people are more likely to be connected to co-partisans not just because of other factors that happen to be correlated with partisanship, such as age, race, geographic location, or other interests and preferences, or because algorithms preferentially recommend new connections with co-partisans.

“Instead, partisans are much more likely to connect to complete strangers simply because they share the same political views.

“This suggests that if one seeks to reduce partisan assortment on social media networks, it may be necessary for algorithms to actively counteract pre-existing psychological biases – biases that are part of the political sectarianism in which America is currently embroiled."

The study, Shared Partisanship Dramatically Increases Social Tie Formation in a Twitter Field Experiment, is published in the Proceedings of the National Academy of Sciences.