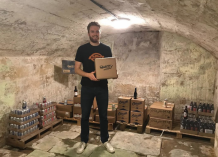 The enterprising 22-year-old, originally from Gloucestershire, started off with the Best of the Cotswolds – which proved so popular that Best of Devon is about to be launched.

Most small independent UK breweries have struggled during lockdown, with the Society of Independent Brewers reporting an average drop in sales of 82%.

And the majority have difficulties selling their wares to non-locals – according to SIBA around three-quarters of small UK brewers sell less than 20% of their beer further than 40 miles away, making their tipples beyond the reach of the average drinker.

“We wanted to reverse that trend by giving breweries an e-commerce functionality. One way of doing that is to get their beer into a tasting group of regional craft beers,” says Quinn.

Quinn’s course at the University of Exeter Business School included a placement year, which he spent with the likes of Amazon developing expertise in e-commerce.

He then found success through Amazon Campus Challenge, a student competition in which teams seek out new businesses and introduce them to the world of e-commerce.

Providing his hometown craft brewery with the ability to sell directly to customers online rather than just through pubs, Quinn helped prevent the small firm from going bust once lockdown hit.

It gave him the confidence to start his own venture, which he launched while hunkered down in his family home during lockdown.

He recalls: “Originally all the beer would be kept in our cellar unpackaged, then when deliveries came through I would go down and get the right beers, package them and then cycle them to people’s houses. I did this for two-and-a-half weeks and ended up cycling 350km!”

“I spray-painted the first batches of boxes with our logo and write tasting notes, telling people about the breweries, about the beer, how to taste them and a little bit about QWERTY Beer Box.”

With demand higher than anticipated, Quinn realised he needed some help – and a better distribution method than pedal power.

In May he contacted the SETsquared Exeter Student Startup Team, who provided advice and mentorship as well as facilitating opportunities for him to pitch for seed funding and develop his professional network.

Quinn pitched for an initial Student Startup Market Validation Grant of £500 and then a further £3,500 to grow and develop the business – funding that came through the support of Santander Universities UK.

And using his experience working with Amazon, Quinn was able to utilise the web giant’s fulfilment centre network and user base to get national Amazon Prime next-day delivery service.

With the business in full flow, Quinn feels the time is right to scale-up operations. This month he joined the SETsquared Exeter Entrepreneurs’ Programme, a fast-track online programme designed for the founders of startup businesses, and he has also gained a place on the SETsquared Exeter Business Foundations Programme, created to provide tech start-ups with a broad range of intensive and structured training.

He has also enlisted the help of friend and Cass graduate Niki Porsch to curate collections of craft beers from regions and cities across the UK.

“I think the time to do it is now,” he says. “The breweries need support, there’s a recession so I’m chucking everything in there and hopefully we can get more authentic craft beers out to people in the UK because there is a clear demand for it.”

“I want to take my experience and help these local breweries. I love craft beer and have relished the opportunity to build relationships with brewers, who are not getting the recognition they deserve because many of them they don’t have capacity or the expertise in e-commerce.

“We’re reaching out to these small independent craft beer providers and working with them to generate greater national recognition of their cracking beer.”