How virtual reality takes the ‘work’ out of workouts

If you want to exercise harder, enjoy it more and feel it less, pull on a VR headset and plug in some upbeat tunes, leading sport scientists say in their latest study.

When exercising, people feel better when they lose themselves in music and computer-simulated environments, shows a paper in the British Journal of Health Psychology.

“The exerciser’s mental bandwidth to process fatigue is reduced by the virtual world and soundscape provided by the immersive technology,” said lead author Dr Jonathan Bird of the University of Exeter Business School.

“Participants appeared to thoroughly enjoy the virtual reality exercise and enjoyment makes people more likely to stick to a routine.”

In one of the first studies to show VR makes exercise more fun, volunteers listened to Shawn Mendes’ There’s Nothing Holdin’ Me Back, while pedalling through virtual  rolling French countryside in the VR headsets.

“It was quite striking how the combination of virtual reality with music boosted exercise-related pleasure, compared with just music or control conditions,” said Brunel’s Professor Costas Karageorghis.

“Our findings show the abundant potential for the use of virtual reality combined with music to get people more physically active in their own homes.”

The researchers measured cyclists’ feel-good factor – how they felt before, during and after exercise, their attention – whether they focused inwards on their body or outwards on their virtual surroundings, and how much they enjoyed the exercise. They also monitored heart rate variability and perceived exertion.

With the VR gear available for less than £200, the team call for more research into its public health benefits, especially with many people now stuck indoors because of lockdowns.

“Customers tell us working out in VR helps them look forward to workouts and encourages them to go on longer,” said VirZOOM’s Eric Janszen. “They want to see what’s over the next hill or get to the next gate. The 'work’ is literally taken out of the ‘workout’, as the technology is so immersive and attention grabbing.”

“It can transport you way outside your own home, even when you’re stuck firmly within it,” added Dr Bird. “It’s a kind of exercise escapism.” 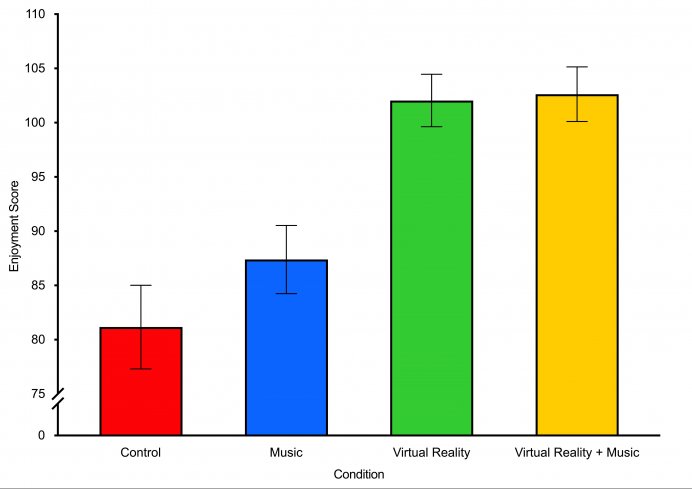