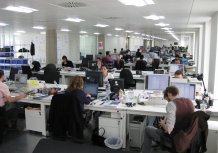 People considering quitting their jobs stop supporting current colleagues because they no longer feel they need to do favours for them, research shows.

Instead of feeling obligated to current co-workers who have provided guidance, those on the hunt for a new post start to focus on other people who can help them in another job or company

However individuals who are considering quitting their jobs do make more of an effort to maintain contact with people at work they consider to be friends because they worry they will be without close colleagues when they are employed elsewhere.

Those who worked longer hours and those with higher tenure were more often sought out for advice, while those who were older were less frequently asked to provide guidance. People usually became friends with people in the same level of job or length of service, or those who were a similar age and had similar views on their job satisfaction.

Dr Andrew Parker, from the University of Exeter Business School, who carried out the study, said: “We found people who are considering quitting their jobs don’t then feel the need to help or do favours for those who have given them advice over the years. They feel less obligated towards their old colleagues and begin to focus on the benefits of creating new ties.”

“However they maintain existing relationships with colleagues who are friends, because they don’t want to lose this relationship when they leave their job. They worry they might have less time available to create new friends.”

Academics questioned 121 employees from eight healthcare organisations in the Netherlands. They were surveyed three times, through questionnaires sent four months apart, and asked to respond to how much they agreed with the comments: “I frequently think about quitting this job” and “I will probably look for a new job soon” using a five point scale. They were also asked to identify colleagues who they viewed as friends, or turned to for advice or help. They were asked: “Do you usually go to this person for help or advice on work-related matters?”