“If I could give some advice to a prospective student, it would be to work hard and make sure to join lots of societies. Societies are where I met most my friends, and the socials are incredibly fun.” 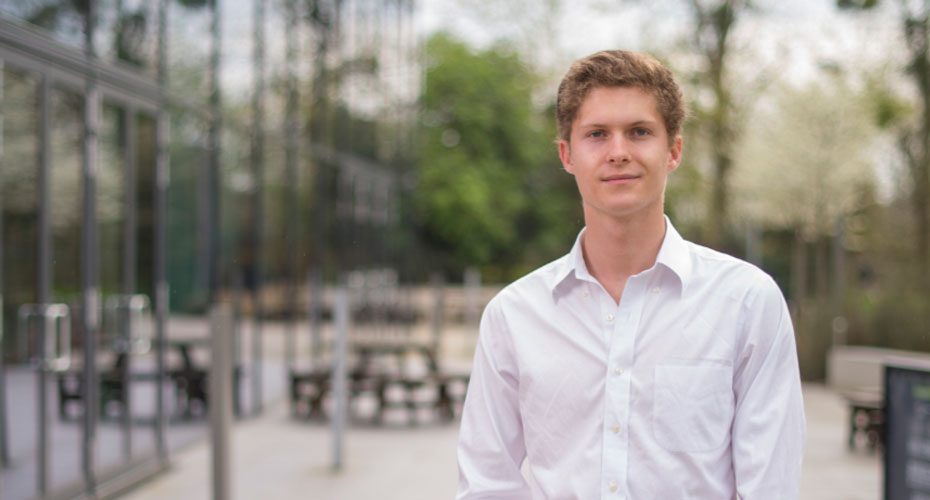 Coming from France, Christopher likes the international vibe on campus, along with the modern facilities. Christopher has joined a number of societies – from badminton and snow sports to the Spanish society.

“Before coming to the University of Exeter, I visited several UK universities, but as soon as I arrived in Exeter, I fell in love with the university. The green campus, the Forum, sports facilities and student accommodation were all incredible compared to other universities I visited. On top of that, it was well ranked in the UK. Everything in Exeter is in easy walking distance: the city, train station, and campus are all in close proximity, making being a student here incredibly convenient.

So far, I have been very happy with my course and modules. Whenever I haven’t understood something, I have visited my lecturer in their office hours where they have helped me understand the topic. This extra support has helped me greatly when completing essays and exams. My favourite module was marketing communications because the contents of the course were really interesting and the lecturer was really engaging.

Another positive is the electronic resources available. If you are ill and cannot make your lecture, you do not need to worry because they are recorded and posted online. There’s also an app available, where you can check your timetable, access your emails, and check computer availability on your phone.

The campus itself is a beautiful environment to study in. It has multiple lakes, and greenery, which is great when walking around campus to your next lecture. The Forum is also state of the art, with plenty of high technology study rooms, such as the Forum Exploration Lab, which boasts group study interactive touch screen tables. There are also lots of independent study spaces, such as silent study rooms. Campus definitely has an international feel. Walking around campus, you will hear many different languages being spoken, and I have made friends from all over the world.

As a non-UK student, I found Exeter very friendly and easy to settle in. The fact I am French helped me make friends, because it interested people and I got asked lots of questions.

My first year accommodation was Holland Hall. Location wise, it was perfect, being just a one-minute walk to the Sports Park and since I play a lot of sports, it was very convenient. It was also nice to have my own shower and bathroom, and I gained a lot of time by not having to worry about making food since Holland Hall is catered.

Since I play a lot of sports, I joined a lot of sport based societies such as tennis, table tennis, badminton, and snow-sports society. Each society had socials every two weeks which was a great way to meet new people. I also joined the Spanish society which helped me improve my Spanish skills.

The city isn’t a large city, but it does have everything. Recently, a new restaurant development opened in the city centre, featuring all kinds of exotic foods, from well-known chain to independent restaurants. The Quay is a great place to take or stroll, jog or bike ride along the river-side. Along the river are lots of independent gems, such as the Waterfront which does some of the best pizzas in Exeter. The atmosphere is perfect for any kind of night out.

If I could give some advice to a prospective student, it would be to work hard and make sure to join lots of societies. Societies are where I met most my friends, and the socials are incredibly fun.”