I have ensured that innovation and passion is well supported, especially from service users and practitioners working with them. 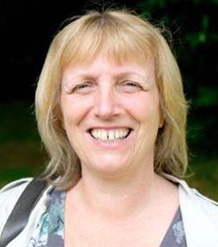 Lucie has built a strong board and management team to develop the models, systems, culture and expertise required to ensure EDP remains a key player in the field. Whilst developing the organisation to respond to competition and the demands of a changing landscape, Lucie has ensured that innovation and passion is well supported, especially from service users and practitioners working with them. This is particularly evident in Dorset, where EDP, with a large group of peer mentors and volunteers, has been a significant player in Dorset's acclaimed position as one of the best performing treatment systems nationally.

Beginning as a volunteer for a homeless charity, Lucie has worked for 30 years in the social care sector. For the past 20 years, she has worked in statutory and non statutory drug and alcohol organisations - as practitioner, counsellor, manager, Chief Executive and trustee. As Director and Chief Executive of EDP Drug and Alcohol services, Lucie has been a key player in leading EDP from a small, locally based charity (turnover less than £1 million) to a medium sized regional charity (turnover circa £6 million). Through strategic planning, developing significant partnerships and reinforcing a culture of continuous learning and high performance, Lucie has ensured the organisation can respond to the changing landscape, whilst retaining the passion, value base and innovation which characterises EDP's roots. Lucie is on the board of trustees for Alcohol Concern.

She completed an MBA at Exeter University in 2012, specialising in leadership. She gained a distinction and a Dean's commendation for outstanding achievement. In 2013, Lucie co-presented a paper, focusing on themes of 'addiction' in leadership, at the International Studying Leadership Conference in Rome. Lucie was appointed  an Honorary Fellow of the University of Exeter Business School in October 2014.