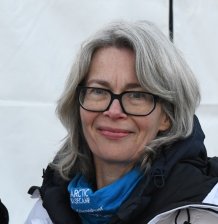 A University of Exeter researcher is behind an ingenious attempt to raise awareness of the melting Arctic region and what it means for humanity by asking people to 'change their names' for COP27.

Gail Whiteman, a Professor in Sustainability at the University of Exeter Business School, is the founder of Arctic Basecamp, a science communications platform that regularly attends high-level events such as the World Economic Forum in Davos and the COPs with the aim of 'speaking science to power' about the global risks from Arctic change.

Professor Whiteman, who has changed her social media profile for the duration of the conference to 'Gail Uncontrollable Wildfires Whiteman', has launched an ArcticRisk Name Generator that allows anyone to type in their name and obtain a new name, replete with climate risks, which can then use on social media and beyond.

And attendees of COP27 can visit the name generator through QR codes on banners and digital screens at the conference venue, and the Arctic Basecamp team will supply sustainable name labels.

Professor Whiteman and her team are tireless in their efforts to raise awareness among global leaders of the scale of change in the Arctic, which is warming at least four times quicker than the global average and driving global risks elsewhere.

They say the Arctic name generator will "help the crisis in the Arctic make a name for itself" and are encouraging high-profile people to get involved, reasoning that "when you've already made a name for yourself, people pay attention when you change your name".

One such person is the actor and Arctic Basecamp board member Rainn Wilson, better known for his role in the US version of The Office, who has released a video in which he explains why he has changed his name to 'Rainnfall Rising Heat Wave Rising Sea Levels Wilson'.

Join me @ @ArcticBasecamp in bringing attention to the melting issue. We need world leaders to take action at COP 27!
The Arctic is melting at Millions of Liters per second, yet this problem can’t seem to make a name for itself, so we’ll make a name for it.
Go to link in bio ⬆️ pic.twitter.com/TgEG84fOmQ

In a video posted to Twitter, Mr Wilson explained that “as a cheap little stunt to help save planet Earth, I’ve changed my name on Twitter, Instagram and even on my fancy writing paper.” He explained his reasons, saying: “I changed my name … to help tell the world leaders and influencers that we need to act now.”

Professor Whiteman added: "We are so proud to have celebrity friends like Rainn Wilson (now known as Rainnfall for short). What happens in the Arctic doesn't stay there! It affects all of lives! Let’s get re-named at http://arcticriskname.org."

Professor Whiteman and the Arctic Basecamp team specialise in engaging and creative ways of awareness raising and climate activism, camping out in sub zero temperatures at the World Economic Forum in Davos in a real Arctic research tent, and last year at COP26 they brought an iceberg along to the to the conference in Glasgow as a visible reminder of what Arctic warming means for the planet.