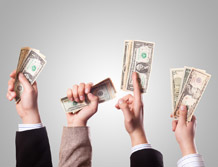 People will donate between a half and a third more to charity if they are expecting a bonus or windfall but don’t yet have the cash in their hand, according to research by the University of Exeter’s Business school.

Trials designed to test generosity by economist Dr David Reinstein found that people asked to donate to charity from cash they are expecting give around a third more to charity than if asked after they receive the money.

The findings may influence how charities approach fundraising from city bankers expecting bonuses or those due to inherit money.

The new research is part of a wider programme of research into the behaviour of giving by academics at the University of Exeter Business School.

It builds on a study by Dr Reinstein, a senior lecturer in economics at the University of Exeter, and Dr Gerhard Reiner of Dusseldorf Institute for Competition Economics which found people may be less generous with cash in their purse or wallet than money in a bank account. Their research, including behavioural trials, found that people agreed to donate to charity roughly twice as much when their earnings were presented on a computer screen than placed in front of them in cash.

The new research suggests asking people to pledge money before they have actually received it could boost charitable earnings dramatically.

“If you won the lottery, inherited vast sums or got a £100k bonus from your employer, how much of it would you give to charity? If I asked you after you won this, do you think your answer would differ? Evidence suggests that it would,” said Dr Reinstein. “As well as raising interesting philosophical questions, such as ‘are we as generous as we believe ourselves to be’, this has practical implications for charitable fundraisers. It shows it may be better to ask for conditional commitments from future gains.”

The findings are part of an ongoing research programme by Dr Reinstein, a University of Exeter economist, based at the Business School, Dr Reiner and Christian Kellner, Lecturer at the University of Southampton.

The donations and prizes were real, not hypothetical. In some trials, participants knew they were in an experiment, while some did not.

The findings will feed into the debate about tax breaks for charitable giving and whether charities could increase donations by obtaining pledges from people in line for cash bonuses and other windfalls.

The Charities Aid Foundation has welcomed the research.

Susan Pinkney, Head of Research at the Charities Aid Foundation (CAF), which helps more than 250,000 people give regularly to causes they care about, said: “This is a fascinating insight into the way people think about supporting good causes. We know from experience that many people are hugely generous giving directly from their monthly salaries and get a great deal of satisfaction using regular donations to build a charity fund that allows them to give sizeable donations to their favourite causes. “Research like this helps us understand how people like to give and build on the culture of supporting good causes which makes Britain one of the most generous countries on earth.”