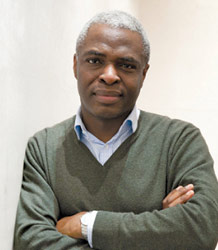 The University’s Winter Graduation ceremony will take place on 18 January 2014 and we are delighted to welcome Exeter alumnus Wol Kolade as our Honorary Graduate.

Wol Kolade joined private equity firm, ISIS, in January 1993. Since becoming Managing Partner in 2000, ISIS’ funds under management have grown 25 fold and now currently stand at over £1.2 billion. His role encompasses overall responsibility for the strategic development of ISIS and active involvement in making and managing investments.

Wol initially trained as an engineer, having studied civil and structural engineering at King’s College, London. After obtaining an MBA from the University of Exeter, he spent three years with Barclays in various head office roles before joining ISIS.

Wol was Chairman of the British Private Equity and Venture Capital Association in 2007/8, a Council Member from 2002 to 2009 and Chairman of the Responsible Investment Advisory Board in 2009/10. In addition, he is a Governor and former Council Member of the London School of Economics and Political Science and a Trustee of the Guy’s and St Thomas’s Charity, the second largest medical charity in the UK, chairing its Investment Committee. In 2010, he became Treasurer of the Powerlist Foundation. He is also a Governor/Trustee of a number of independent schools.

Wol appears regularly in the media regarding Private Equity and Entrepreneurship and has featured on the “Today Programme” and “The Bottom Line” on the BBC and “Jeff Randall Live” on Sky TV News.

The Ayudar Foundation and The Wellcome Trust will also be accepted into the University of Exeter’s College of Benefactors.

Mr Gerry Brown and Mrs Clemencia Posada-Brown, as trustees of the Ayudar Foundation, will join us for Winter Graduation.

Since 2011, the Ayudar Foundation has donated more than £630,000 to the University of Exeter Business School to establish the Ayudar Colombia Fund. The Fund provides scholarships for Colombian citizens to study on our exclusive One Planet MBA programme and has catalysed a growing relationship between the University and Colombia. Six Colombian students have now completed the MBA.

The Wellcome Trust is a long-standing supporter and partner of the University of Exeter. In 2010 the Mood Disorders Centre was established as a partnership between the University and the NHS to address key priorities in understanding and treating depression.

In 2010 as a result of a £3.6 million Capital Award from the Wellcome Trust, The Sir Henry Wellcome Building for Mood Disorders Research was established. The facility is dedicated to the improvement of the understanding and treatment of mood disorders. The state-of-the art, fit-for-purpose clinical research facility houses individual and group treatment rooms, with built-in audio visual recording, plus office and meeting space for clinical research.

Most recently, The Wellcome Trust joined with the Wolfson Foundation to grant £4.75 million towards a cutting-edge centre for translational medicine at Exeter. The Wellcome Wolfson Medical Research Centre is part of a £19 million investment in the power and potential of research, innovation, learning and development by The Wellcome Trust, The Wolfson Foundation, the Royal Devon and Exeter NHS Foundation Trust and the University. The centre, based at the NHS Trust’s Wonford site, will provide a unique and inspirational teaching and research facility close to the University’s Medical School at St Luke’s campus, and is due to be completed later this year.

More information about the Ayudar Foundation and the Wellcome Trust can be found on the Honorary Graduates website.